Hello. What are you looking for ?

Breevast and ZBG complete sale of Brussels Finance Tower to Meritz for more than EUR 1.2 billion

Dutch real estate developer Breevast and investor ZBG Group of Companies (ZBG) have sold the landmark Brussels Finance Tower to listed South Korean financial services and investment group Meritz Securities and its London-based asset and investment manager Valesco Group for more than EUR 1.2 billion, the largest single asset deal ever completed in Belgium. The transaction was completed on 17 January and represents Europe’s largest real estate deal of 2020. For Breevast and ZBG, both controlled by Frank Zweegers, the sale of the Finance Tower represents the final chapter of an extensive urban redevelopment as well as a new life cycle for this iconic building in Brussels that started more than 18 years ago. The sale of the Finance Tower provides significant fuel for the acceleration of Breevast and ZBG’s strategy to focus on creating new urban and property life cycles in core cities in the Netherlands, Belgium, Luxembourg and the US.

The Finance Tower (including the adjacent Door Building) represents approximately 200.000 m2 of high quality office space opposite the Jardin Botanique in the so-called Freedom Quarter in Brussels. The sale of this asset represents the final chapter in the urban development, redevelopment and revitalization scheme of this area owned and executed by Breevast and ZBG. The project consisted of the Finance Tower and the urban (re)development of more than 150.000 m2 of office, residential and retail space in the RAC Belair sites (sold between 2014 and 2017). In total, more than 350.000 m2 has been redeveloped and newly developed. Breevast and ZBG were advised by real estate consultancy CBRE and legal and tax firms Loyens & Loeff, Stibbe, and PwC Legal.

Henk Brouwer, CEO of Breevast and member of the Management Board of ZBG, says: ‘The sale of the Finance Tower is a significant achievement, representing a commitment by Breevast and ZBG of almost two decades to realizing a high quality and sustainable asset in the heart of Brussels combining both office and residential space. This successful transaction reflects the growing international interest in large-scale urban revitalization projects in which we specialize. We have a full pipeline of residential, commercial and office projects which aim to address the growing demand for high quality urban real estate.’

Alexander Villaverde, member of the Management Board of ZBG, says: ‘We are pleased to hand over this high quality asset to its new owners. This project, together with the adjacent RAC Belair sites, was a long-term commitment to the future of Brussels. The complete development represents one of the largest combined office and residential developments in Europe and we are proud to have played a role in realizing it. ZBG will continue to build its portfolio by investing in high quality real estate & development as part of our broader investment activities.’

Meritz Securities, part of Meritz Financial Group, headquartered in Seoul, South Korea, is a provider of financial services and investments. It manages assets worth more than EUR 45 billion. Meritz has been active in the European real estate market for some time driven by the strong market fundamentals and its desire for geographic diversification. In its acquisition of the Finance Tower, Meritz was advised by Valesco Group, a European real estate investment and asset manager based in London. In addition to the Finance Tower, Meritz has recently acquired large-scale office buildings in the United Kingdom, France and Germany.

In December 2001, Breevast and ZBG acquired the Finance Tower for EUR 311 million after winning a public tender organized by the Belgian federal government. This sale and leaseback transaction included a full renovation and redevelopment including an extensive asbestos removal scheme of Belgium’s largest stand-alone office property covering all 36-stories. Work started in 2005, took more than 3 years to complete and cost EUR 325 million. In a significant achievement, the project was completed on time and under budget. From 2008 onwards the Finance Tower has provided office space for approximately 4.800 civil servants working for multiple federal ministries and agencies based on a long-term lease agreement with the Belgian federal government. The neighboring RAC Belair project included more than 90.000 m2 of office space, 45.000 m2 of residential apartments, 5.000 m2 of retail, a 7.500 m2 school and almost 2.000 parking places. This project was (re)developed in phases and sold between 2014 and 2017.

The sale of the Brussels Finance Tower is the latest milestone for Breevast and ZBG. In October 2019 they completed the sale of one of Germany's largest residential projects, an office complex site to be redeveloped into more than 1.200 new homes in the popular Gallus inner-city district of Frankfurt am Main. Earlier in the year, Breevast completed an investment in two office buildings in Beverly Hills, Los Angeles, for USD 153.5 million. The current development pipeline consists of more than 600.000 m2 of commercial, office and residential projects, with a focus on projects which help meet the growing demand for urban living and mixed-use areas. 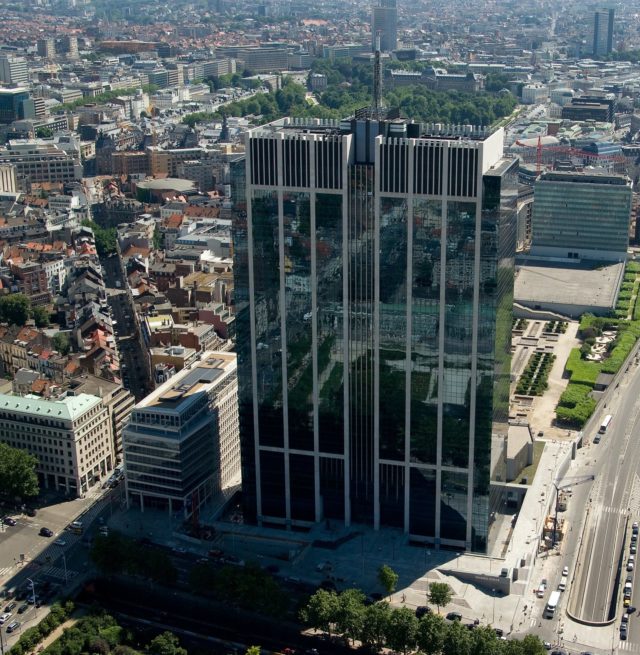